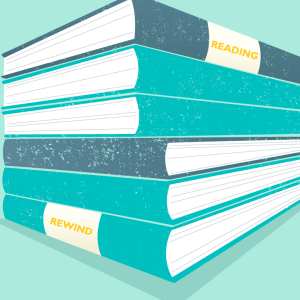 This week I’ve been revising one of my manuscripts, but I took a break to read the newest Veronica Mars book, because LoVe. 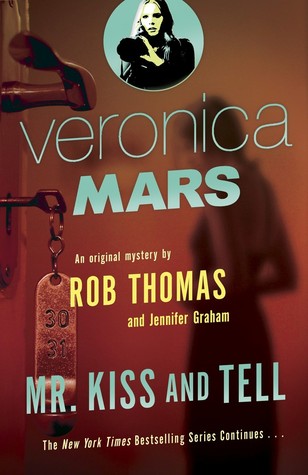 In the second book in the New York Times bestselling mystery series, Veronica Mars is back with a case that will expose the hidden workings of one of Neptune’s most murderous locations.

The Neptune Grand has always been the seaside town’s ritziest hotel, despite the shady dealings and high-profile scandals that seem to follow its elite guests. When a woman claims that she was brutally assaulted in one of its rooms and left for dead by a staff member, the owners know that they have a potential powder keg on their hands. They turn to Veronica to disprove—or prove—the woman’s story.

The case is a complicated mix of hard facts, mysterious occurrences, and uncooperative witnesses. The hotel refuses to turn over its reservation list and the victim won’t divulge who she was meeting that night. Add in the facts that the attack happened months ago, the victim’s memory is fuzzy, and there are holes in the hotel’s surveillance system, and Veronica has a convoluted mess on her hands. As she works to fill in the missing pieces, it becomes clear that someone is lying—but who? And why?

Mr. Kiss and Tell is a fun mystery wrapped up in the wonderful world of Veronica Mars. The story has the same tenacity and snark and relationship drama of the TV show, which is exactly what I want from these books. I know these characters so well, it’s like watching them in my head with the actors’ faces and voices playing out each scene. It seems like the writers tried a little too hard in places to use characters/familiar names from the series and bring up events from the show as a nod to the fans, which wasn’t necessary (at least for me!). As long as I’m getting my core characters, I don’t need all the extra stuff to keep me around. As long as they keep writing these books, I will keep reading.

So, I only read one book this week. But I have a really, really good excuse. I finished the first full draft of my current WIP. *flails* So I did a LOT more writing than reading. But my reward for finishing? I got to read the new Veronica Mars book. (You should probably congratulate me on my restraint for not devouring it the second it came out, because that was some serious focus and dedication on my part.)

Ten years after graduating from high school in Neptune, California, Veronica Mars is back in the land of sun, sand, crime, and corruption. She’s traded in her law degree for her old private investigating license, struggling to keep Mars Investigations afloat on the scant cash earned by catching cheating spouses until she can score her first big case.

Now it’s spring break, and college students descend on Neptune, transforming the beaches and boardwalks into a frenzied, week-long rave. When a girl disappears from a party, Veronica is called in to investigate. But this is no simple missing person’s case; the house the girl vanished from belongs to a man with serious criminal ties, and soon Veronica is plunged into a dangerous underworld of drugs and organized crime. And when a major break in the investigation has a shocking connection to Veronica’s past, the case hits closer to home than she ever imagined.

In Veronica Mars, Rob Thomas has created a groundbreaking female detective who’s part Phillip Marlowe, part Nancy Drew, and all snark. With its sharp plot and clever twists, The Thousand-Dollar Tan Line will keep you guessing until the very last page.

For a die-hard Veronica Mars fan, The Thousand-Dollar Tan Line will not disappoint. Too much. Reading it was very much like watching the show. The characters are so exactly themselves that I could hear the actor’s voices in my head as I read the dialogue. I could see Veronica’s fake-drunk co-ed smile and Papa Mars’ do-as-I-say-not-as-I-do exasperation and Logan’s smoldering eyes and slightly nervous grin (despite being stuck on a floating metal box and MIA for most of the book).

Most of the characters you expect to see make appearances, some pop more often than others (yay besties Wallace and Mac!), but it’s fun whenever Weevil or Dick or even Norris Clayton (the boy crushing hard on V in Season 1’s “Weapons of Class Destruction”—you know the episode with the LoVe kiss heard round the fandom) get a little page time too.

For those newer to VMars, the story itself was interesting and had enough misdirections to keep me guessing. The case of two missing girls brought back a character who caused a lot of emotional distress for Veronica and added an interesting undercurrent to the physical danger that our favorite PI kept finding herself in. It was closure eleven years in the making, and I’m glad Veronica (and I) finally got it. But…SPOILERS…

The one thing that really bugged me about Lianne’s return was that Veronica focused so much on her mom’s alcoholism—which from watching the show, I assumed was only after Keith got fired as sheriff not for V’s whole life—she seemed to forget that her mom STOLE $50,000 from her! And that was after Veronica used her college fund to put Lianne in rehab and lost it all when her mom checked herself out. And there was no “Sorry, honey, I know what I did was horrible.” Or “Hey mom, how about you double my fee to make up for almost ruining my chances at Stanford?” That won’t even bother new fans, or even casual fans who wouldn’t expect it to be there. But as someone who watched this show from Season 1 on UPN, I feel like it’s something that would’ve bugged the shit out of my girl and she wouldn’t have let it slide.

Also, especially after the events of the movie, I would expect the author to know that Gia’s last name is Goodman not Goodwin.

Overall, I enjoyed the hell out of this book and can’t wait for the next one. I mean, anything that keeps these characters alive is something I want to—and will—support.

I’m not exaggerating when I say that there are days I’d much rather spend with fictional people than real ones (with a few very special exceptions). And one of the fictional characters I LoVe most is Veronica Mars, a snarky, adorable, wicked-smart teenage PI.

When Rob Thomas and Kristin Bell started a campaign to raise money to make a Veronica Mars movie, I didn’t even have to think about supporting it. In fact, it was more like “Shut up and take my money!” As a backer, I’ve got my t-shirt, my stickers, and my poster (not to mention the digital download and DVD that will come my way in the coming days/months). Plus my name is on the official movie website, which kinda kicks ass. 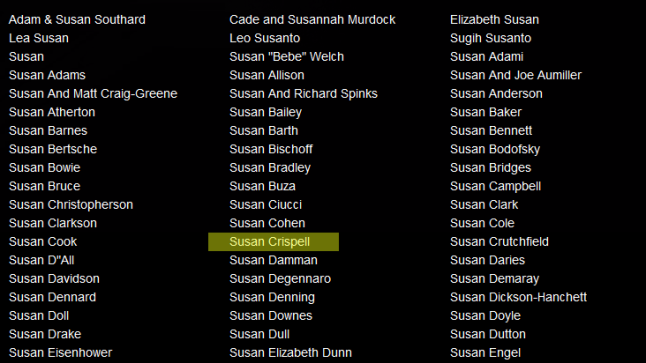 And now the movie is finally in theaters. And my girls and I are going tomorrow in our backer shirts (Krysti and me), LoVe shirt (Lindsay), and Mars Investigations shirt (Erin) to fangirl all over the place for characters we have loved (and missed) for years. I have all sorts of faith in these writers and actors to do these characters justice. And to give LoVe the happy ending they need. Team Logan all the way. 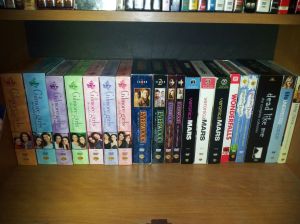 As a writer, I draw a lot of inspiration from television. That’s not to say that books don’t also have considerable influence ‘cause c’mon, you’ve seen my verging-on-needing-a-straightjacket book fangirling. But there are certain shows and show creators who, in my mind, are some of the best storytellers around. I worship at the feet of Bryan Fuller (Pushing Daisies, Wonderfalls, Dead Like Me), Amy Sherman-Palladino (Gilmore Girls, Bunheads), Rob Thomas (Veronica Mars and Cupid), Joss Whedon (Buffy the Vampire Slayer, Angel, Firefly) and Greg Berlanti (Everwood).
While they all had a staff of super-talented writers to back them up, they are the brains behind the characters I adore. They made girls who were snarky and quippy and smart and kick ass. They made bad boys good (ahem, Logan Echolls) and good boys swoon-worthy (hello, Piemaker). They made parents who gave a shit (Papa Mars walked through fire for his girl!) and friends who were fiercely loyal (Wallace, Lane, Hannah, I’m looking at you!).
And they instilled in me an epic love of dialogue. Man, do these writers know how to turn an f-ing phrase. If you don’t believe me, go watch five minutes of any of the shows above. That’s all it will take to recognize their brilliance. I’ll wait.
Okay, no, I won’t ‘cause once you get five minutes into any of those shows, you won’t come back until you’ve mainlined every season available. Just trust me on this.
But all of that’s to say that what gets me most excited about writing a scene is how the characters react to each other. What they say, how they say it, what physical movements go along with those words and the tone. Sometimes one line of dialogue in my head is enough to spark an entire scene or spin the plot in a whole new direction. Dialogue tells me who the characters are at their cores. And it gives me the opportunity to be snarky (okay, maybe I don’t need an excuse for that!) and funny and brave and bitchy and coy and angry and intense. And a whole mess of other things that I tend to keep hidden behind my antisocial shell (at least from the general masses).
So, as I get ready for Friday (let the NaNo games begin!), I’m remembering what I love about each of these shows, these characters and hoping what I write will be half as smart as they are.  And I’ll be doing it in VMars style, ’cause this came in the mail today: 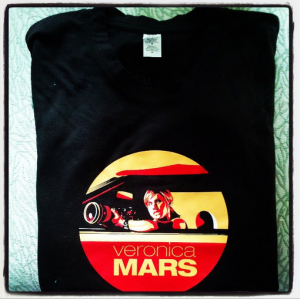 Author of magical southern women's fiction novels The Secret Ingredient of Wishes (Sep 2016) and Dreaming in Chocolate (Feb 2018) and the magical YA novel The Holloway Girls (June 2021). 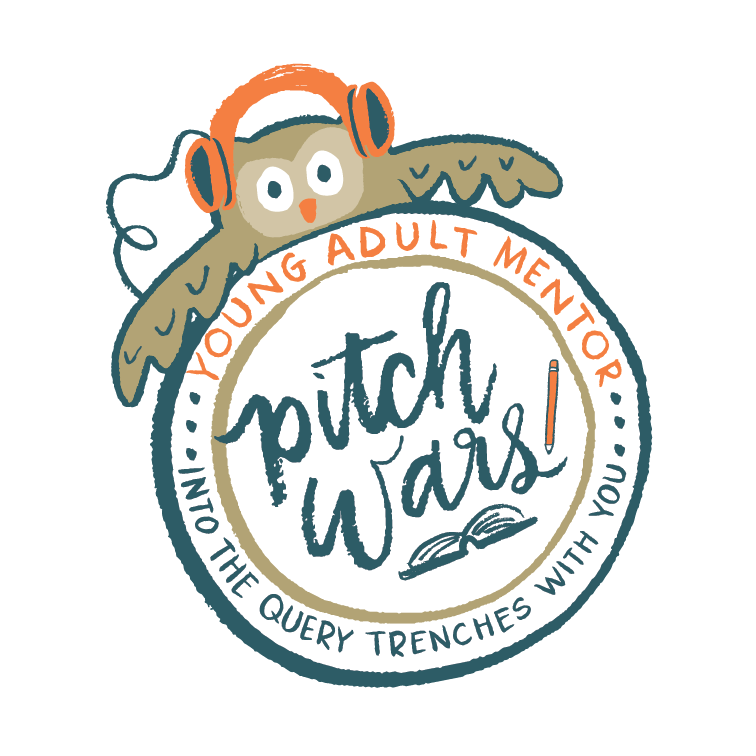